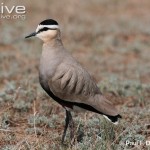 The Sociable Lapwing is a wader in the lapwing Aves family. This gorgeous medium-sized bird has long black legs and a short black bill. Summer adults covered with grey feathered back and breast, dark abdomen and white under the tail. The head has a prominent pattern, with a black circlet. The upper neck is ochre, white tail with a black terminal band and uniquely brown, white and grey wings make it almost instantly recognizable in flight. Length is 27â€“30 cm. The call is a harsh kereck.

This species is migratory. It breeds semi-colonially in small groups of 3-20 pairs from mid-April until July, and begins the migration south in August or September. Flocks of several thousand birds have been known to gather before migration in Siberia and Kazakhstan but migration itself usually occurs in small groups of 15-20 birds. In Syria, it arrives yearly around mid-February to late March, and again in Autumn. It arrives on its wintering grounds in India and Pakistan by September-October. It departs the wintering grounds in March or early April, arriving on its breeding range from mid April.

It breeds mainly in the transition zones between Stipa and Artemisia grassland steppes where bare saline areas occur near water-bodies. It uses dry wasteland, cultivated, ploughed and stubble fields. Nests are preferentially placed in areas of Artemisia where there is a high dung abundance and vegetation is short. Steppes that are densely vegetated may be avoided, however areas with a low percentage of bare ground and high percentage of tall vegetation are preferred by chicks, and may be important for providing cover from predators. It has been postulated that it evolved to nest in habitats created by migratory Saiga Saiga tatarica, but this is unlikely given the timing of Saiga movements relative to Sociable Lapwing breeding, the speed with which they pass through areas, and the very short swards favoured by the birds; nevertheless Saiga grazing combined with fires may have promoted optimal habitat.

It feeds chiefly on insects including Orthoptera, Coleoptera, and moth larvae. It also takes arachnids and frequently small amounts of plant matter including grains, leaves and flowers. Small stones are often found in the stomach, occasionally along with the remains of small vertebrate bones and mollusc shells. The diet is more varied during the breeding season, being limited mainly to orthopterans and other insects during the non-breeding season.

Key factors explaining the magnitude of declines remain poorly understood, despite much recent research. On the breeding grounds, it was probably formerly threatened by the conversion of steppe to arable cultivation and the reduction in grazing by large herds of native ungulates and, latterly, by the loss of the enormous herds of domestic grazing animals from state-sponsored collective farms. However, since the collapse of the Soviet Union, large areas of arable cultivation have been abandoned and are reverting to natural steppe habitat, herds of domestic livestock have become concentrated around villages, while an increase in fires (owing to reduced control of fires) may also have contributed to an increase in suitable habitat. These factors may be behind the possible increase in numbers in recent years. Concentration of nests in heavily grazed areas in the vicinity of villages may have increased threats from human disturbance and trampling by sheep, goats and possibly other livestock. Low egg survival due to nesting in areas of high grazer density has been suggested as one of the causes for the species’ decline. Nest predication by Rooks Corvus frugilegus – which have expanded widely into the breeding range with the plantation. The species may be affected by the increasingly dry climate in its breeding and wintering range, but it is not clear if this benefits or threatens this semi-desert species.

An international species action plan was published in 2004. It is legally protected in Armenia, Kazakhstan, Russia, Turkmenistan, Ukraine and Uzbekistan, but this is generally not enforced. An intensive research project at the breeding sites in central Kazakhstan was initiated in 2004. In 2005 the Sociable Lapwing research project was initiated in Kazakhstan by a team from the RSPB and the Association for the Biodiversity Protection in Kazakhstan (ACBK) in order to understand the causes of the species’s decline. A survey of historical breeding sites in the South Urals was conducted in 2005 and another at passage sites in south-west Russia was carried out in 2006 (Field et al. 2006). Coordinated counts were undertaken at key passage/wintering sites in Syria and Turkey in March 2007 (Anon. 2007). A project was initiated in Turkey in 2008 to gain a better understanding of stopover sites used by the species in Turkey during migration. Satellite-tags have been placed on nine birds in central Kazahstan,one of which was tracked to Turkey in October 2007, to provide information on the speciesâ€™s migration, with the information being fed into a website. Hunting in Syria has been identified as a major threat with measures being implemented to control it. The inaugural meeting of the International Sociable Lapwing Working Group was held in Palmyra, Syria in March 2011. The group agreed on conservation measures required by each country, and planned cross-border actions to protect the species across its extensive range.