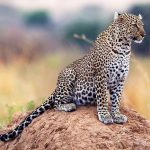 The common leopard is listed as protected and illegal to hunt in all provincial laws of Pakistan. This wild cat is naturally associated with the humid temperate jungles that include both rain and coniferous jungles of the northern areas. Four subspecies of this big cat have been identified in the mammals’ directory of Pakistan, historically. On the other hand, it is hard to distinguish among the subspecies. The leopards are confined to the northern Pakistan with infrequent reports of sighting in some areas of Balochistan.

In my homeland Pakistan, these cats are mostly concentrated in the Moist Temperate jungles of Margalla Hills National Park, Murree Reserve Forest, Ayubia National Park Khyber Pakhtunkhwa and neighboring forest habitat of Jammu, Kashmir and Neelum valley. There are also infrequent reports from desert areas of Punjab which largely show its a nomad animal. Nomads and locals leave their live stocks open to forage in the leopard habitat and they get annoyed when a leopard hunts one, this is the most prominent conflict between leopards and villagers.

The following report was published by the WWF-Pakistan organization that lists the major threats to the animal. The major threats to this big cat population are deforestation (for timber, fuel and housing) and intrusion on the forests of National Parks that are protected forests. This distressing reduction in the habitat of its natural prey leads to a conflict; Leopards do not find natural pray and hunt down livestock. By law, grazing cattle’s and domestic herd in National parks is prohibited. This is the only land available for protected species but locals are rigid and illiterate. As a result, a sequence of occurrences involving leopard attacks is constantly being reported in the Galliyat area.  The additional threats are poaching, carrying away of cubs by cruel dealers and business of body parts, pelts to be exact. Pelts, claws and teeth have been reported to be offered for auction in the marketplaces of the northern Pakistan.
The major habitat of the leopard is suffering from serious degradation threats. Approximately 30% of the land in the world is forested but unfortunately less than 3% land of Pakistan is forest. Pakistan has the deforestation at 2.1% and no other country in Asia has the deforestation rate higher than this. Erosion of land and landslides, mainly due to this high deforestation is intimidating the ecosystem of the area. Key factors leading to this high deforestation consist of firewood and timber mining, ongoing urban projects such as gas pipeline layout, spreading out of the highway networks and deforestation for urban colonies.