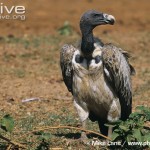 Commonly identified as Long-billed Vulture, the Indian Vulture breeds mainly on crags in the mountains of Pakistan and India. It is a forager and a scavenger, feeding on dead animals which it finds by towering in flocks over savanna and around human being habitation. It has hairless head, very wide wings and short tail feathers. It weighs 12 to 14 lbs, measures 2.5-3.25 feet in length, and has a wingspan of 6.5 – 7.5 feet.

The Indian vulture is known to breeds in south-east of Pakistan and in the Gangetic plains, Dehli, M.P and up to in India. It was common until very recently, but since the mid-1990s has undergone a disastrous turn down up to 97% all through its range.

Found in urban areas, townships, rural communities near cultivated planes and in open and forested regions, this species nourishes exclusively on carrion and frequently links with White-rumped Vulture when searching at garbage deposits and slaughterhouses. It nests about exclusively in gatherings on cliff and abandoned areas, though in a region, where cliffs are not present, it has been accounted nesting in woods. Vultures also contribute a great deal in the wider landscape in clearing out the carcasses and remains of domestic and wild animals.

Gyps vultures were being found lifeless and dying in Pakistan and all over India with a major being reported. The anti-inflammatory medicine diclofenac, that is used to cure joint pains in domestic mammals, has been recognized as the grounds of death, with kidney malfunction resulting in animal death in the vast areas.
The drug is thought to be ingested by these birds with the flesh of dead mammals which were treated with diclofenac in the last days of existence. In 2005 the Indian administration declared its support for a prohibition on the veterinary utilization of diclofenac. This was
Pakistan’s struggling and critically endangered vultures now get hit by