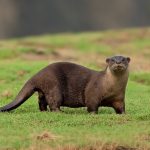 The only region in Pakistan where this species is found is the southern swamp forests, large rivers and mangrove jungles. Major threats to local otter inhabitants are loss of wetlands due to production of hydroelectric power plants, recuperation of wetlands for human colonies and cultivation, lessening of prey because of habitat loss, poaching and pollution of water channel by insect killers. In the majority Asian countries enlarged inhabitants during the last few decades, insufficient and unproductive rustic growth programs have not been capable to deal with the evils of poverty, forcing populace to be more and more reliant on natural resources. As a result, the majority of the wetlands and watercourse do not have sufficient prey support for supporting otter populations.