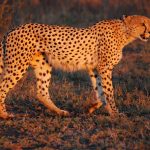 In all of the Asia, Cheetah is now extinct from nearly all of its territory. Its significant territory used to broaden from the shores of the Mediterranean and the Arabian Peninsula, north to the northern shores of the Caspian and Aral Seas, and west through Uzbekistan, Turkmenistan, Afghanistan, and Pakistan into central India. One reason for their regional extinction from nearly all of their Asian range is considered to have been the illegal capture of these wild cats. They were then trained to hunt down the game, mostly, deer and gazelle as sport for the lords and ladies. Further key grounds of the vanishing of Cheetah from the area are probably the scarcity of their natural prey, the hinting of Cheetahs for fur and game, and environmental pollution that led to the destruction of their habitat.  However, the Asiatic Cheetah is still known to survive only in some parts of Iran, where it is Critically Endangered. The fact of continuing their existence in Pakistan is unlikely.