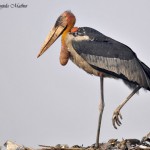 While breeding in the dry time of year (May, June and October) it dwells in swamps, nesting in high woods, bamboo forests and traditionally on rock faces. Breeding is considered to match with the dry season to catch the benefits of plentiful kill as stream levels draws back. In north India, it takes place close to town areas, feeding about marshlands in the breeding season, and dispersing to forage at garbage dumps, abattoirs and interment grounds at other period. In Cambodia, it mates in fresh water swamped woods and areas of dried out jungle with short-lived pools, or else scattering to seasonally flooded forest, remains dumps, high wet plains, mangroves and intertidal levels.

The Greater Adjutant is extinct in Pakistan. The entire population around the world is approximated to be around 800-1,200 mature individuals and around 1,200-1,800 of those in whole. Most of which are in India.
Threats

The major threats are immediate development, chiefly at nesting camps, habitat annihilation, including a number of cutting of nest-trees, contamination and misuse of wetlands. Furthermore, the Indian population is exposed by condensed use of open waste dumps for the clearance of carcasses and products. It has been recommended that current nesting collapses in Assam may be due to illness which may have a unconstructive bang upon the species in the outlook. Juvenile birds may also turn out to be tangled in fish nets and the species may experience from the riot of arboreal nature, rivalry for nesting habitat from the minors Adjutant javanicus and poisoning from pesticides. toxicity of tiny swampland to grasp fish in the dry jungle of northern and eastern Cambodia poses a noteworthy danger.