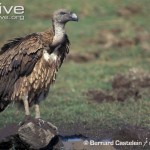 The species was there in a huge number, in Pakistan and other southern parts of Asia but until the nineties. White-rumped Vulture population has suffered decline swiftly. This is unbelievably up to 99.9% in the 15 year span from 1992 to 2007. In 1986 the species was illustrated as probablyâ€ the most plentiful large bird of prey on the planet and was considered an annoyance but is now extremely rare facing extinction in the near future.

These Vultures are normal sized birds and featherless head and neck, very wide wings, and tiny tail feathers. It is a great deal smaller in length than the Eurasian Griffon. It has a fair neck ruff. The mature individuals have a fair white back, rump, and underwings. The openings in the nostril are like slits. Young are mainly dark in color and take about 5 years to become the adults. In air, the mature illustrate a dark leading wing edge and have a white lining on the underneath but the coverts under the tail are black.

These Vultures are native to Pakistan, India, Nepal, Myanmar, Bangladesh, Thailand, Laos, Cambodia and Vietnam, and thought extinct in China and Malaysia. It has been documented from south-east Afghanistan and Iran where its position is currently indefinite. However, it vanished from most of South-East Asia in the beginning of the 20th century and the only major population in the region is found in Myanmar and Cambodia, chiefly in the north with around a few hundred individuals. Since the mid-1990s, it has experienced a disastrous decline more than 99% across the Indian Subcontinent, initially noticed in National Park of Keoladeo, India but same started to happen in Pakistan and Nepal to the point that the species is highly threatened with extinction.

It is chiefly found in plains and frequently in mountainous regions where it makes use of light woodland, rural communities, towns, and open places. It nourishes on putrid and fresh carrion. At meal time, substantial aggregations can make up, and habitual shared roost sites are used. These vultures are social and typically found in specific flocks.

It breeds in colonies in high woods, frequently near human population. There is poor knowledge of activities known, even though satellite tagged birds have shown that they will scavenge over a huge range. Vultures play a major role in the wider landscape offering cleaning services and were formerly greatly relied upon to help dispose off fauna remains in the Subcontinent.

Like other Vulture specie, these are yet another victim of the inflammatory veterinary medicine diclofenac, used to care for domestic animals. With the start of the 20th century, Gyps vultures were being found dead and dying all over Asia and major declines and regional deaths were being documented. The veterinary drug diclofenac has been identified as the cause of death, with kidney malfunctioning. Another veterinary drug in used in India, ketoprofen, has also lately been noted to be poisonous to the species, and amount of residue levels in carcasses in India shows that they are present in adequate concentrations to cause vulture mortalities (Naidoo et al. 2009). Other potential contributory factors are changes in human use and dispensation of dead livestock. In Cambodia, vultures are still endangered with tremendously low population of wild ungulates, use of nesting forests for timber and unintentional poisoning at carcasses laced with pesticides to kill stray dogs.

The governments of India, Nepal and Pakistan passed legislation in 2006 banning the production and introduction of diclofenac as a veterinary drug. These bans led to a diminution of diclofenac within treated carcasses which are the principal food source for vultures in Pakistan. Meloxicam has been introduced as a vitenary drug replacing diclofenac and has been experimented as safe for this species. Moreover, birds have been satellite tagged in different parts of their habitat to get a better thoughtfulness of their activities, feeding range and site fidelity. By April 2008, in Pakistan, 11 individuals were at a centre established by WWF in captivity. During 2009 this number raised to 14 in Pakistan. In late 2009, tests of artificial incubation techniques were due to start soon. By November 2011, the total individuals held in breeding centers, affiliated to SAVE (Saving Asia’s Vultures from Extinction), was 221 birds.