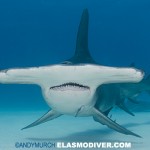 The great hammerhead, however, is the largest of the 9 species of hammerhead sharks and is reported to reach up to 6.1 m in length and weigh up to at least 581kg. These sharks have a flat hammer-shaped head with a notch at the center located along the front edge. Juveniles have slightly curved heads at the front margin that becomes nearly straight as they reach adulthood. This species can be identified by its nearly rectangular head. The first dorsal fin is very high and curved; the second dorsal and pelvic fins are high with deeply concave rear margins. They are light gray or gray-brown on the dorsal side, white on the ventral side and fins lack conspicuous markings.

It is native to Pakistan Widespread in the Arabian sea and south-west Indian Ocean but in South Africa is confined to the KwaZulu-Natal coast, where it co-exists with the scalloped hammerhead S. lewini, also an inhabitant of the tropic, and the smooth hammerhead S. zygaena, which favours cooler waters. There is a pupping and nursery ground in a coastal mangrove estuarine area of southern Belize. The great hammerhead ranges widely throughout the tropical waters of the world, from latitudes 40Â°N to 35Â°S. It is apparently nomadic and migratory, with some populations moving polewards in the summer, as off Florida and in the South China Sea.

Sphyrna mokarran is a coastal-pelagic and semi-oceanic tropical hammerhead occurring close inshore and well offshore, over the continental shelves, island terraces, and in passes and lagoons of coral atolls, as well as over deep water near land, at depths ranging from near-surface to over 80 m.

Females breed once every two years. Pups are born in late spring to summer in the Northern Hemisphere and between December and January off Australia.

The great hammerhead is extremely vulnerable to overfishing due to its low overall abundance and long generation time. Due to the distinctive head shape of this genus, it is typical for catches to be reported at the genus level, Sphyrna spp. Therefore, it is rare to find fisheries statistics that are specific to one species of hammerhead shark. Due to the great hammerhead?s preference for warmer waters, it can be expected to make up a greater proportion of tropical catches of hammerheads than more temperate fisheries. Sphyrna mokarran is taken by target and bycatch, fisheries and is regularly caught in the tropics, with longlines, fixed bottom nets, hook-and-line, and possibly with pelagic and bottom trawls.

Assessment of its conservation status is difficult as few fisheries separate the great hammerhead from other hammerheads in their reported catches. This species is listed as globally Endangered on the IUCN Red List. It is Endangered in the northwestern Atlantic and the Gulf of Mexico, where though it is a non-targeted species, populations have dropped 50% since the 1990s due to bycatch. It is also Endangered in the southwestern Indian Ocean, where large numbers of longline vessels operate illegally along the coasts for hammerheads and the giant guitarfish (Rhynchobatus djiddensis). The great hammerhead catch rate in Indian Ocean has declined 73% from 1978 to 2003, though it is yet undetermined whether these represent localized or widespread depletion. The great hammerhead is Critically Endangered along the western coast of Africa, where stocks have collapsed with an estimated 80% decline in the past 25 years. The West African Sub-Regional Fishing Commission (SRFC) has recognized the great hammerhead as one of the four most threatened species in the region, though fishing continues unmonitored and unregulated. Off northern Australia, this species was assessed as Data Deficient but at “high risk”. Concern has arisen there over a substantial increase in illegal, unreported, and unregulated (IUU) fishing, reflecting the raising value of this shark’s fins.

No conservation measures specifically protecting the great hammerhead have been enacted. It is listed on Annex I, Highly Migratory Species, of the UN Convention on the Law of the Sea, though no management schemes have yet been implemented under this agreement. The banning of shark finning by countries and supranational entities such as United States, Australia, and the European Union, and international regulatory bodies such as the International Commission for the Conservation of Atlantic Tunas (ICCAT), should reduce fishing pressure on the great hammerhead.